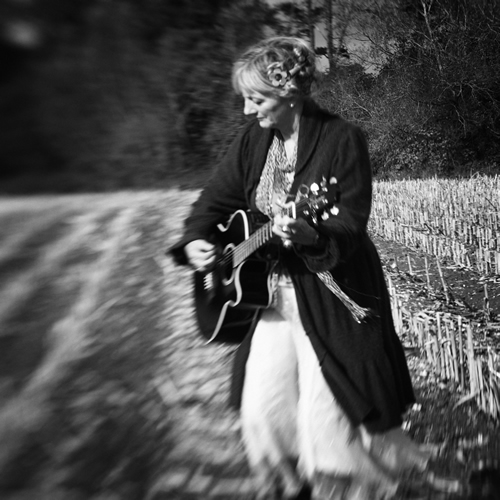 The Plymouth-born, North Cornwall-raised singer songwriter is celebrating the achievement of a lifelong ambition – the release of her debut album, THE TROUBLED HEART – with a Fowey show that is part of this year’s Daphne du Maurier Festival.

Diana is an original flower child of the 1960s, a folk-loving country girl who was swept up in the giddy whirl of rock and roll life when she met and married celebrated guitarist Davey Johnstone, a stalwart of Elton Johns’ band for many years and father of her son, Tam.

By the mid-70s Diana was a divorces single mother and art graduate whose musical ambitions had been pushed to the back shelf. Now, after working in the film and television industry, over the past 10 years Diana has been revisiting a love for songwriting and performance that first found its feet at the legendary Folk Cottage at Mitchell, near Newquay, four decades ago.

Her melodic, soulful and poignant songs tap into a lifetime of emotion and observation that can be universal shared. Her first release three years ago, was the EP LEARNING TO WALK, recorded at Airfield Studios at St Merryn in Cornwall with her guitarist and produced brother Joe partridge.

It was a varied and pleasing collection, written from the female viewpoint, that acted as a gentle introduction to Diana’s work.

THE TROUBLED HEART moves a step further. Recorded over many months and in different locations with different people, it examines the Victorian idea of love falling short of its longing. She describes it as a “bit of a patchwork”.

“I suppose I looked at a lot of Pre-Raphaelite paintings and some of the literature and songs are embed in a very English way from that era (which my grandparents and parents were product of and which my generation rebelled against!),” says Diana.

“But still it’s there now as something nostalgic… especially as the cover photo shows members of my dad’s family and links to the cover, what was also a family photo.

“Also, quite consciously I think, I was plugging into some of the songs I heard early on from people like Joan Baez which have a dark brooding quality – The Banks of the Ohio for example.

“As far as writing goes most of the songs ‘appear’ like the childhood colouring books where the pictures materialise when the paper gets wet – an alchemical process which I don’t care to mess about with!”